Post-war: Joining the SAL
In 1945-46 the Spartan League was revived; to reduce travel expenses, the league was split up into regional divisions, with the Polytechnic seconded to the western division. Other leagues, such as the Middlesex Senior League, also started back up.
The club reverted to its pre-war constitution during that season, with a new management committee appointed. Quintin Hogg MP, the son of the club’s founder, was awarded the presidency in succession to the late Sir Kynaston Studd. He had played for the football club in his boyhood.
In order to attract more supporters to Chiswick, an agreement to share the Stadium pitch with the famous Corinthian Casuals was fostered – this lasted for four seasons until they uprooted to Cheshunt.
After a sixth-place finish, the previous format was restored for 1946-47, with the Poly featuring in the division one western, below the premier division. Several mid-table placings were secured in the following years. 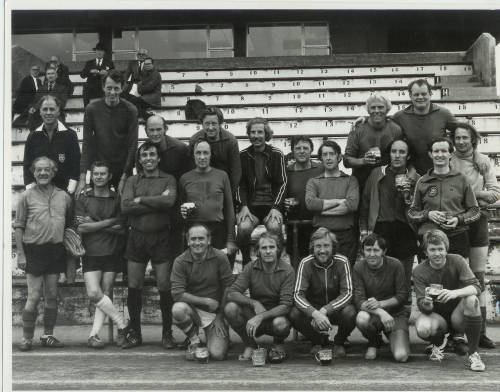 Poly Vets 1976 (Sir Stanley Rous in trilby hat towards top left)
The above picture was taken in 1976 when a Polytechnic Vets XI, skippered by Peter Jackson, played an AFA Select XI as part of the centenary celebrations. The game was attended by Sir Stanley Rous, Honorary President of FIFA. He can be seen in the trilby hat towards the top left of the picture. John Keane is pictured on the right of the middle row.
The next year the fist team met Midland Bank in the final of the London Banks Challenge Cup. The Bank won to complete a double alongside the AFA Senior Cup.
Arising consistently among the lesser successes was the name Norman Dugdale. That season he had captained the fourth team to promotion and immediately repeated the success in charge of the threes a year later. He did not stop there, winning a divisional title as the third XI went straight up again the following season.
The first team, having missed out on promotion by an agonising point that year, were relegated in 1979-80; but the second team went up to division two and Jackson celebrated his final season in competitive football by taking the sixes up also.
By drawing the final match of the 1980-81 campaign, the top team missed out on the third division championship but were promoted nevertheless. A Colts XI had been set up for younger players which would feed into the top sides: they began by winning their Banks division without losing a game. Half of the club’s sides won promotion that year.
By 1981 the success lower down meant that six of the eight teams we put out each week were competing in their top division – the exceptions being the main and reserve sides. However the first team brought honour to the club with victory in the Banks Challenge Cup over Lensbury in 1982-83, their first cup triumph.
By 1986 every side except the firsts were featuring in their top flight, with every one of them finishing mid-table in 1987. There were AFA cup triumphs for the fives and fours in that decade – the fourth team coming from two goals down to win 3-2 in ’87.
In the mid-eighties the club considered letting out the stadium to rugby clubs to bring in some much-needed cash, with Fulham Rugby League Club and Rosslyn RFC interested; however the latter’s approach “amounted to virtually a takeover bid”, according to club documents, and they were repelled.
After terrible events at the FA Cup semi-final between Liverpool and Nottingham Forest left 95 people – later to rise to 96 – people dead, Polytechnic donated £50 to the Hillsborough Disaster Appeal Fund, a contribution acknowledged by Liverpool chairman John Smith.
That graciousness was reflected in the award of the Hamilton Trophy the following year for the best hospitality and sportsmanship in the league, based upon referees’ reports throughout the season. Keane, known to almost everyone in the club today, was instrumental in that, taking the meeting and greeting duties and making over £1,200 in raffles for the coffers.
There was success on the field of play also, the first team winning another cup – the AFA Middlesex Senior Cup against Mill Hill Village FC.
Parsons reported the sad news of the death of vice-president Mr F Dolman, who had put in 70 years of service to the Poly Cricket Club and 67 to the Poly FC. There were other faithful servants who passed away too towards the end of the century.
Galvin had completed his half-century of service as secretary but, having undergone a serious operation, Parsons took over the recording duties of the various teams’ fortunes.
So soon after the club was acclaimed as sportsmanlike came, as recorded by Les, the “worst disciplinary record in 118 years of history” during the 1992-93 season.
The year before the first XI finally won promotion back to the top division, the second team won their section, as did the fives. For four years all of the top eight sides except the ones had contested their respective top flights (the ninth XI played lower down in the eighth section as there was not a ninth set of tables).
The 1995-96 campaign was emotional, and not just because we returned to the top division in the senior section. Barry Gibbs was the man who led the team there in his last season with them; then there was the death of Eddie Galvin, who had maintained contact with members in the armed forces during World War II and been a member since 1933.
The Poly were also crowned champions of the fourth section – completing a double with the Senior Novets Cup – while three other sides were runners-up in their own division one tables and the sixes won the SAL Cup. 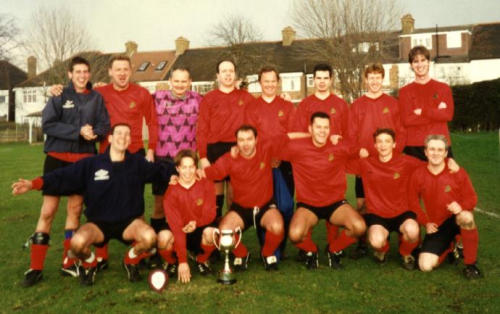 In the first season back, the firsts finished fourth under Ian McKeand and had been top at Christmas. It was the first year that we had fielded a team in the top division of every section – now reduced to seven – with the fours finishing second to narrowly miss out on retaining their title.
There were several cup wins in the following two years but the most impressive feat was the second-place finish of the first team in division one under L Ewing in 2000.
In 2000-01 the first team won the AFA Middlesex Senior Cup and finished fourth in the table. The reserve side won their division two by four points the following year while the sevens won the Junior Novets Cup.
After the sad passing of Les Parsons, John Keane was appointed as chairman.
The seconds went on to take the championship of the reserve section, again by four points, the following season, while the first XI again won the AFA Middlesex Senior Cup.
The sections were altered in 2004-05, incorporating the lower sections within a regional structure and only the top three teams competing in London-wide leagues. The threes finished third in the top flight of the newly-named junior section.
The first team were relegated that season. After a year’s hiatus they returned as champions under Jeremy Seales while winning the cup again, showing the strength of the club in the last few decades.
The second team made it into the top division of the reserve section – now known as the intermediate section – in 2007-08 as Jon Pybus took over, while Rob Sullivan won the manager of the year award as his men secured their title on a double-header final day. The threes, led by Keith Johnston, lost their cup final after goalkeeper Neil Howard was carried off with knee ligament damage.
With Keane taking a sabbatical after many years of service to the Polytechnic, long-time servant Sean Harney was appointed chairman.