19th Century and pre-war period: The Gentlemen’s game
The club was formed in 1875 and initially known as Hanover United, although the present name applied to the wider Polytechnic organisation – which included a multitude of sports teams alongside artistic, religious and social groups – from the beginning. It was the first club in the world to have the name ‘United’ in its title, paving the way for others such as Manchester United. 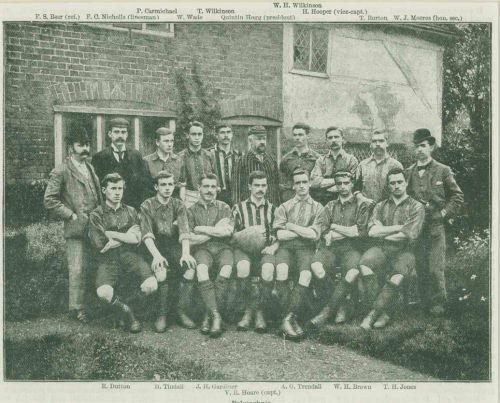 The First Polytechnic Side
Before that the club can lay claim to having had a say in the formation of the original rules of Association Football. The Cambridge Old Etonians of founder Quintin Hogg and his friend the legendary gentleman footballer Arthur Kinnaird, who featured for the Poly for many years, faced the Cambridge Old Harrovians in 1862 – the first time that two institutions had played under common rules which mirror those in use today.
Those formed the basis of the rules the FA adopted in 1863, and indeed Kinnaird went on to serve within the all-powerful governing body for many years, including 33 years as its president.
The organisation which became known as Regent Street Polytechnic and the Hanover club beloved of Hogg and Kinnaird – who competed in nine of the first 11 FA Cup finals – was created to give the lower classes of London somewhere to learn and reap the physical and character-building benefits of exercise. Hogg aimed to teach the ragamuffins he attracted how to become respected young men.
The various sporting clubs quickly attained a degree of autonomy, using different premises to play matches – all paid for by philanthropist Hogg – but remained completely amateur, despite incredible successes such as Olympic gold medals and wildly popular events such as the Polytechnic Marathon.
This amateur ethic extended to organised competition, with the club reluctant to join organised leagues in the 19th Century, preferring instead to contest friendly matches against the likes of famous teams Old Etonians and Casuals.
To our eyes, having been brought up on a diet of regular league football, this may seem disorganised, but it did not stop the Poly running seven teams by 1887. Not that we opted out of leagues altogether: as a founder member of the Southern Football Alliance, Polytechnic FC – as we were now known – lost 2-1 to Tottenham in our first league match in 1892.
A few years before there were three regular teams, whose combined fixtures meant the club played six more matches than any other in the country in the 1880-81 season.
Prior to the name change, Hanover achieved notable success in reaching the semi-finals of the prestigious London Senior Cup in 1884. Having beaten Luton Town in the earlier rounds, we lost 6-0 to Old Foresters – in front of a crowd of 1000 at the Kennington Oval – who went on to win the trophy. However revenge swiftly followed as we dumped them out of the FA Cup at the second-round stage the following season before going out ourselves in round three.
That was the club’s best showing in the London Cup, in which we began competing in 1878, as well as the English Senior Cup. In 1883 we reached the third round of both competitions – scratching against Foresters because we could not raise a side of sufficient strength, despite fielding five regular teams – while in 1894 we beat now professional side Brentford in the London Cup.
In 1889 Polytechnic played Millwall Athletic – the name by which Millwall were known prior to 1910 – in a cup match with an entry price of 3d, with ladies admitted free. We won the replay 3-0. Three years later we played Tottenham, Arsenal – Royal Arsenal in those days, in front of 2000 fans at the Invicta Ground, Plumstead – and Queens Park Rangers, now the world’s richest club. We beat QPR 5-1 before losing a return fixture 2-1.
The long servants – and booze hounds – among our number should make note of the year 1884: the club’s first social took place at that time, while alcoholic beverages were not served in the clubhouse until the latter half of the 20th century. The club began to tour in 1891: the first trip was to Tonbridge and Tunbridge Wells, and laid the foundation for a yearly Easter jaunt that remains to this day. An exhibition match between the first XI and a second team – featuring 15 players! – ended 6-0 to the firsts.
Years before conscription laid bare the club’s resources and put the lives of many of the young men who formed its backbone into peril, the incidence of the Boer War near the turn of the century caused many members to volunteer, including Major Vincent Hoare – made first XI captain six years before – and Quintin Hogg’s son Douglas.
On February 2, 1901 all matches were cancelled to honour the passing of Queen Victoria.
The season before Stewart Dandridge, who would go on to feature for the club for 30 years until the age of 50 – captaining the first XI and also helping run the organisational side of things – played his first game.
After a few years in the Southern Suburban League, his men finished a creditable third in the Olympian League in 1909-10; famous Olympic gold medal-winning cyclist WJ Bailey played for the football club, as well as Middlesex, at this time. Our ‘A’ team won the local Chiswick league twice.

In 1911 an historic era began when we were accepted into the respected Spartan League along with three other clubs; the final of the 1914-15 Middlesex Senior Cup was reached and subsequently lost to the West London Old Boys.

The following picture, contributed by Steve Harris, shows the Polytechnic First Team From 1911/12: 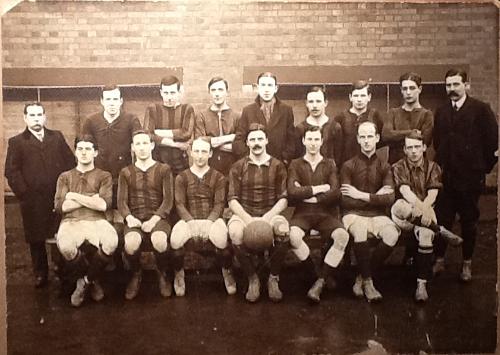 The advent of war in 1914 caused the club to shut down from mid-1915 for its duration. Many members were killed.

Action at the Quentin Hogg Memorial Ground in the early years.