Inter-war: The Spartan years
Len Harris, secretary of the Polytechnic Institute, oversaw the club’s reorganisation after the Great War. In 1919 it was officially reformed, with an impressive six teams given the human tragedy suffered by those associated with the club.
That season the Spartan League resumed with 11 clubs, including the Poly. Having finished in a highest position of sixth prior to the conflict, we did not do a great deal better afterwards; however there was the success of the reserve side’s admittance to the league’s second division in 1920-21 to celebrate.
Teams also fulfilled fixtures in the Middlesex Premier and Middlesex First as well as the local Chiswick competition.
By 1922 there were nine teams as membership rose, while RG Jenkins was picked to represent the league in an exhibition match versus the Southern Amateur League, which we are a part of today. Reports indicated that he was one of the best players on the pitch; the following season he was chosen to play against the Isthmian League, known to non-league buffs as one level below the three present Football Conference divisions.
Better was to follow. In those days Chelsea occasionally fielded first-class amateur players, and Jenkins was called in to feature at outside right: he also played on the right wing for the England amateur representative side against Ireland in 1923-24 to press acclaim before returning to the Poly.
He earned one further cap, while team-mate Gregory was also called up by the national side, like Jenkins in 1931.
The 1920-21 winners of the Spartan League were Wycombe Wanderers; they also won the Berks and Bucks Senior Cup while their reserve side triumphed in the second division. They left to join the Isthmian for the following season.
In 1924-25 Polytechnic firsts finished bottom of the top division, forcing the second side to drop to the ‘B’ league of division two. After several seasons of underachievement by the main team, including two bottom-place finishes, the reserve side fell out of the Spartan League in 1930.
Further down, sports director Major T Marchant began to organise a Polytechnic Senior Schools League on Saturday mornings in 1925, while the Strollers played friendly matches – the gentleman ethic was still strong within some, who preferred the purity of one-off fair competition to a league format.
In 1926 officials from Chelsea, Arsenal and the Football Association, among others, attended a jubilee dinner marking 50 years of Polytechnic FC at Holborn. 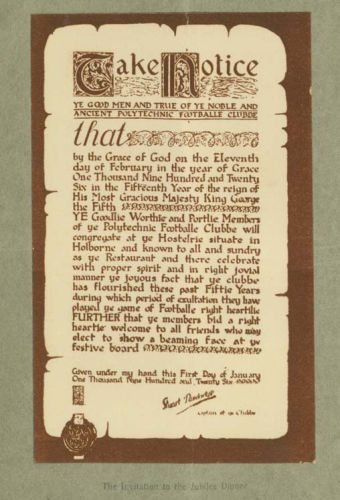 Jubilee Dinner Invitation
Kynaston Studd, who had been appointed president of the Polytechnic as a whole in 1911, became Lord Mayor of London in 1928. The strongest link of a long family association with the club, Studd had featured alongside Polytechnic founder Quintin Hogg at centre-half in the late 1880s. After captaining Cambridge University Cricket Club prior to that, he had decided to pursue a career in missionary work rather than business; Hogg had invited him instead to work among the needy within the Polytechnic as honorary secretary.
In 1929 the club’s colours changed from white to green and red hoops, almost what they are today, although they were later changed further to halves in the same colours.
In 1935 the club’s diamond jubilee saw Chelsea donate 100 guineas to the Chiswick Stadium fund. When the Stadium, intended as a world-class athletics venue, was finally completed two years later, the first surface was deemed unplayable.
Former first-team captain Stewart Dandridge, who had made his debut at the age of 20 at the turn of the century, brought an end to over 30 years playing for and administering the club with a dinner in 1936. Several of the original Hanover line-up were in attendance.
By that time the Poly had 10 established teams and often fielded 11 on a weekend, revealing a strength in depth of which others could only dream, while the Easter tour was also revived.
The club, massively popular off the pitch, finally began to claim some glory when two high finishes in the early thirties were trumped with third place and promotion back to division one in 1935-36.
Seventh place the following season was promising. Even a next-to-bottom ending the year after was not too disheartening, as we did not go down and the second team competed within the Spartan set-up once more – although they too finished in the penultimate position, in the division two east.
In 1938-39 fortunes improved with another seventh-place finish. The reserves did brilliantly to come second in division two west, but fate – in the form of Adolf Hitler – conspired to cut short the revival.
The leagues were closed down, but it was decided the club would continue to contest friendlies – especially against sides made up of the servicemen on leave.
Sid Greenaway initially held absolute power due to the difficulty in holding committee meetings in wartime. The 1941 Annual General Meeting officially suspended the club’s constitution and oversaw the formation of an executive committee featuring a skeleton staff of a secretary, treasurer and press secretary.
The club would not bow down to the threat from abroad despite air raids, rationing and the wholesale loss of players. We helped set up the West Middlesex Combination (later the Middlesex Senior League), which featured local sides such as Edgware Town, Harrow and Hounslow.
Our record on the field during the Second World War was poor; however the club won plaudits for the energies devoted to keeping competition alive in the face of adversity.