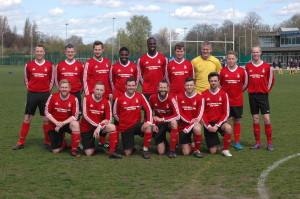 Despite being promoted from the 7th team and moving up 2 leagues from the previous campaign, this was by far the most successful season of the Weston era. Some impressive early season wins showed the potency of the Poly attack, coupled with a strong defence.

In the end, a few unexpected defeats and some tough games against league winners Old Actonians including a tense cup final left the Poly trophy less, but satisfied with a fine footballing season.

Player of the season Steve Yeaman